R-22 Refrigerant: What You Need To Know

You may have heard that the future of R-22 refrigerant is looking bleak. The rumors are true -- the days of R-22 are limited and the clock is ticking.

Here is a timeline of the history and future of R-22, from its beginnings to its ban in production in 2020. 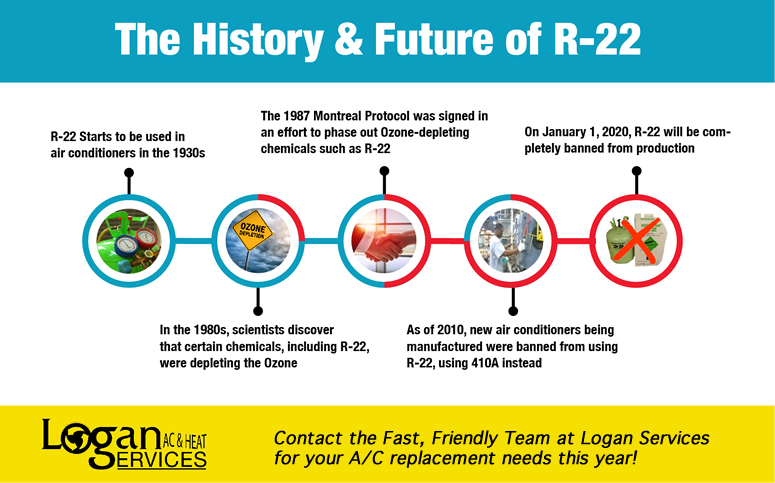 Since the 1930s, R-22 (also known as Freon or HCFC-22) has been used in refrigeration and air conditioning.

Discovery of the “Ozone Hole”

In the 1980s, scientists discovered the “ozone hole”. This “hole” in the ozone layer of the upper atmosphere threatens health risks to both people and the environment. Certain chemicals, including R-22, were recognized as ozone-depleting, and work began on finding solutions to this problem.

With the “ozone hole” a danger on a global scale, the Montreal Protocol treaty was drafted and signed by 197 countries. This treaty required that countries work toward phasing out ozone-depleting chemicals.

R-22 Phased Out of New Systems

By January of 2010, new air conditioners being manufactured were banned from using R-22. 410A (also known as Puron) replaced R-22 to become the main refrigerant used in new air conditioners. However, existing systems that used R-22 could still be serviced, despite the increasing cost to refill them.

As of January 1, 2020, R-22 has been banned completely from production. If your air conditioner still uses R-22, the next time your system leaks, the cost to replace the old system may outweigh the cost of repair.

If your system has a history of leaking R-22, get ahead of the demand and take a look at your replacement options. You can see just how affordable a new air conditioner can be with a  free in-home estimate today!

Planning to do more research before moving forward with heating/cooling replacement? Explore some of our most popular HVAC research topics here >>